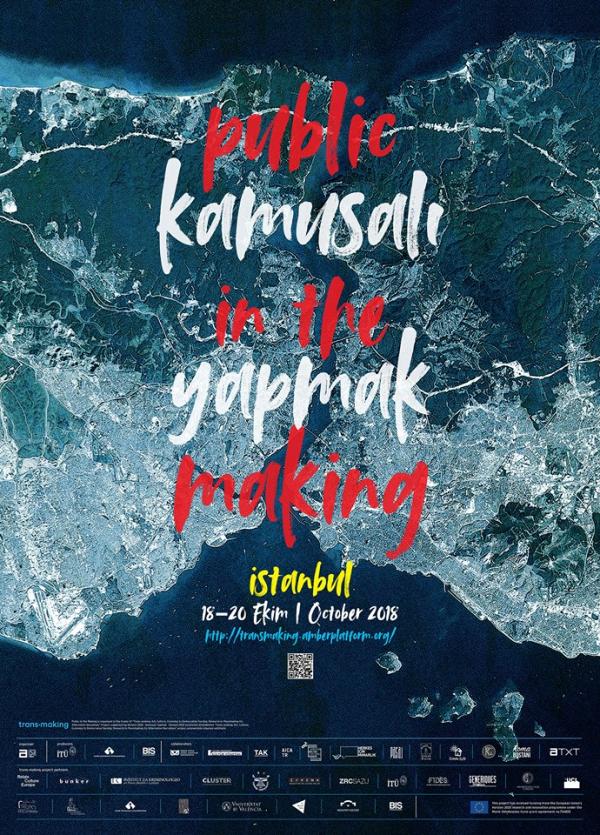 Public in the Making

By Nafiz Akşehirli (in collaboration with Programming Board)

This series of events aim at to take a critical look at the notion of the Public Sphere, now through the spyglass of the concept of making. For the purposes of this conference making refers to the pure act of production, of construction, of the human work and effort necessary and sufficient to create a public sphere, whose nucleus are two people who speak to each other, openly and honestly, putting forth their minds, their ideas on an important issue, a question or a problem that pertain to the two of them and possibly to their fellow human beings, their community and constructing a third idea, preferably better than what they had each said up to that point. Any two people speaking about public things are already working to create and sustain a Public Sphere.

Against this miniaturized and highly ideal image of a Public Sphere composed of a two speaking and working in relative peace and under the calm of reason, our historical moment is characterized by an ever-growing and super-complex public sphere, divided yet united by the ever-intensifying and increasing involvement of digital technology in all aspects of human life. The Internet, most of all, has enlarged and multiplied the Public Space to an unimaginable degree and given the Public Sphere a new infinitesimal form in the persona of the singular user, who now has a new platform to speak his or her mind with infinite others. Our digital age brings new possibilities, methods, tactics as well as new problems such as the power and means to actually shape the public’s opinion, as the recent Facebook/Cambridge Analitica scandal showed. Yet on the other extreme, there is the digital divide, reminding us that not everyone has the same access to this digital public sphere, hence the public is always/already divided by the levels of its reach.

Two immediate dangers characterize the present: First, the radicalization and intensification of the police and military measures to guard the economic political and military status quo, which is more or less true for the majority of the World, including the Industrial West. This trend threatens the very stuff that any public sphere is made of: right to free reasonable honest and passionate construction of common truths, preferably with as many other human beings as possible. Second, a  global and total threat of human made or human supported disasters that may claim unpredictable numbers of lives looms large. For the first time in history, human military power and industrial capacity have the ability to radically change or deteriorate the courses and consequences of an already contingent Nature and to cause unimaginable damage to large human populations. This is perhaps the most Public of all Public matters, an issue that calls for the largest Public intervention and criticism imaginable, the ideal content of a true Public Sphere.

The intellectual tendency, especially since the 1970s has been to rightly emphasize the inherent multiplicity of the notion of a singular Public Sphere based on social differences such as gender, race and class and to question the supposed singularity of an ideal public Sphere, in its Habermasian version. While there always were and there are now ever-different and multiply situated publics, in harmony and antagonism with each other, there are also questions, ideas, threats and problems that concern each and all of us. This is true for the realm of ideas where the very freedom to speak one’s mind is under threat and also true for the material realm where public spaces everywhere including and especially in the host city of this conference, are threatened by the onslaught of capital and capitalist privatization.

While we wholeheartedly agree with some of the critiques of the notion of a singular and historically privileged public sphere, we think that the signs of the present, its dangers and possibilities, are compelling us to also begin thinking about and to begin making, constructing the Public Sphere in the singular, to entertain, to debate and begin the making of singular yet common truths that apply to all. The Conference aims to trace and possibly construct this singular notion through the spyglass of the different disciplines that matter to the true spirit of the word Public: Art, Design and Science.

“Kamusalı Yapmak / Public in the Making” is being organized in the frame of “trans-making: Art / Culture / Economy to Democratise Society. Research in Placemaking for Alternative Narratives”; https://trans-making.eu/ project supported by Horizon 2020, coordinated by Relais Culture Europe (Paris) in collaboration with more than 150 individuals from 14 institutions in 20 countries. amberPlatform organises the event which is produced by project’s Turkish partners İstanbul Technical  University, Izmir University of Economics and BİS in collaboration with local partners İstanbul Bilgi Üniversitesi, Mimar Sinan Fine Arts University and associated with AICA and Europist. 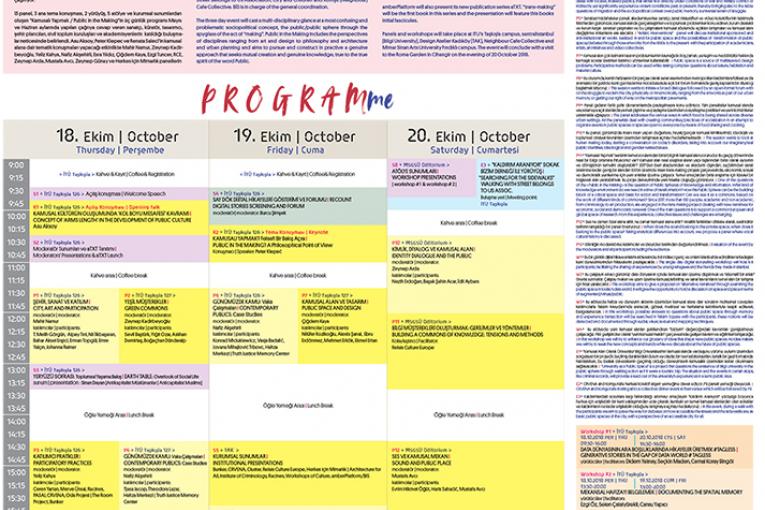