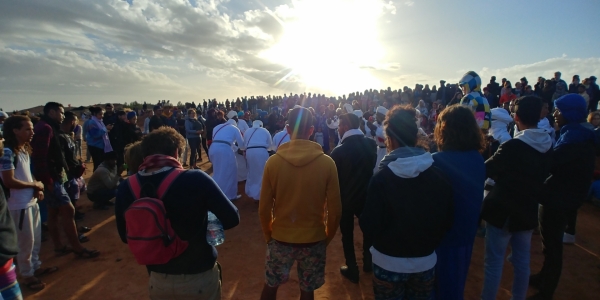 My secondment in Morocco, focused on three themes: the situation of cultural events in the public space, a focus on the concept of volunteering in Morocco, as well as experiencing Moroccan culture and traditions in a most direct sense, in order to understand them properly (and as a result use this knowledge while working on better assimilation of foreign students in the city of Lublin). I was able to experience all these things thanks to cooperation with such organizations and events as: Racines Association, Taragalte Festival, Visa for Music, Institut Cervantes, Institut Francais, Goethe Institut, Circostrada, many NGOs operating in Morocco, representatives of the situation not only in Morocco but also Rwanda, Zimbabwe, Tunisia or Egypt and many more.

Culture has the strongest power to present public space in a different light. It gives a new context and therefore new perspective. For instance, following the example of the Taragalte Festival, I was able to see that it is possible to treat open space equally and with respect. Both tourists and local citizens were sharing the Sahara area very peacefully, respecting one another and the place that they were in. One may say - it wasn't the typical public space. But wasn't it, really? It just wasn't “bounded” by formal regulations. The same thing happened in Tiznit. Both, Kasbah Aghenaj (one of the locations during live performances within festival Amur’Art) or in the yet to be opened L'Blend space. In the first case: local citizens started to come only because they heard the music. It was enough of an invitation. In the second case: local children already treat L'Blend location as their "own", visiting it before it was officially opened.

When allowed, Moroccan people are interested in public space events and are very willing to participate. What I see as a problem (which was confirmed also by many artists or culture activists) is how difficult it is sometimes to organize an open space event. As well as how restrictive it can be. It is an issue, as we should bear in mind that many people treat in-building cultural locations as not exactly open ones. People tend to think you need to be properly educated to visit such places, or that events proposed ther won’t be for them. And by visiting some of the finest cultural places in Morocco I must agree – that some people are just afraid to enter. While by operating in the open space – we can engage many new people, because that is the space they know and find familiar. Morocco has lots of crazy creative creators and animators, but it is high time that they should receive proper support, not only from foreign organisations but also from the side of their own governments and sadly it’s not always the case.