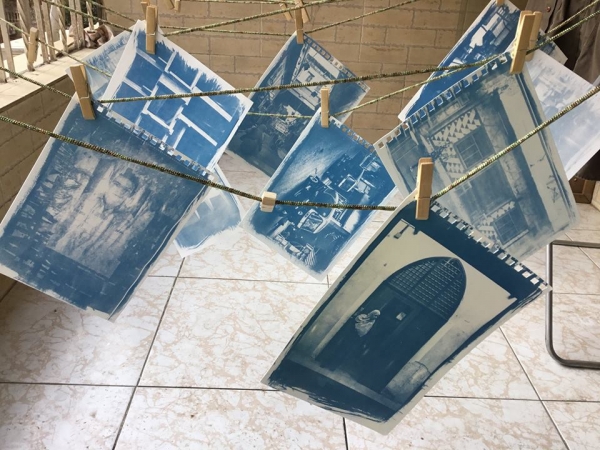 A series of images produced with the alternative photographic printing technique of the Cyanotype in the African city of Cairo serve us to reflect on the uses that occur in the public space of the Egyptian neighborhood of DownTown in Cairo. Uses in conflict in the most populated city in the Arab world using a 19th century photographic technique.

The use of sunlight and the latent image that gives rise to cyanotype are an ideal analogy to try to represent emerging conflicts in the city, which integrate times and logics, which cross spaces and times. Studying the dynamics of urban transformation of DownTown Cairo and its current process of gentrification demands such skills.

Working with light and chance connects with our theoretical research method: drift as aesthetic practice. Drift allows us to explore the phenomena that visually represent the city in its conflicting use of public space.

The walk and the scape dialogue, a certain aesthetic gaze is given to our visual path. We document our route digitally and use it as a resource for learning about the evidences found in our exploration of the city and its image. We seek to communicate the signals about the open and asymmetrical competition of power that urban gentrification entails. A gentrification that supposes the occupation of public space and the appropriation of its value of use, of its memory, symbols, material and immaterial heritage... A city that is the stage and a public space that reflects the three great logics (market, State and civil society) with which to understand the forces confronted by the use and right to the city.

These cairot cyanotypes, as vignettes-photogram of DownTown, integrate a train of lights and shadows. Urban deserts at the service of fades, ellipses, silences, absences, repetitions, apparitions and phantasmagoria of a public space that reverberates.